Recklinghausen Memorial Book. Victims and Sites of Reign, Persecution and Resistance from 1933 to 1945

The “Recklinghausen Memorial Book” reflects the outcome of the decade-long conflict of Recklinghausen’s citizens with the Nazi reign of terror from 1933 to 1945. It is built upon a plethora of city explorations, exhibitions, publications and city maps. Its focus is on people, citizens, neighbours, business partners, representatives of the social life in times of democracy, who due to the totalitarian claim of the National Socialist tyranny and its ideology have fallen victim to discrimination, defamation, occupational disadvantages and even to occupational bans, ostracism, incarceration or who have lost their lives as victims of the Nazi death machine.

They have been severely scarred or even wiped out. The perpetrators also wanted to wipe out their identities and any memories of them, their families and their story, causing them to fall into oblivion. This memorial book defeats their intention. We also commemorate power structures, manipulative influencing, psychological tools of power such as misinformation, systematic propaganda and even the brutal generation of fear which are able to stabilise systems of rule - then as now.

1. Victim Book - Biographical Data and Personal Fates
In its first part we commemorate the victims, give them back their identities and their faces by adding their names, fates and pictures and try to portray their journey through life as best we can in light of the existing sources. This book lists people who were born in Recklinghausen, who worked here or considered Recklinghausen a particularly important place during their persecution. They all have in common that the totalitarian and ideology-oriented system of rule intended to bring into line, adapt or even murder them, their way of thinking, acting and even their mere existence. Their diverse personalities, beliefs, and fates let us feel what the disregard for human dignity and human rights by a totalitarian tyranny means for their respective journeys through life. Go to Victim Book

2. Sites of Reign, Persecution and Resistance
In order to understand their fates and to “locate” them within our city, the second part of this memorial book gives examples of sites of reign, persecution and resistance in our city. These sites connect structures and methods of National Socialist tyranny in Recklinghausen with specific buildings or places and combine them with human fates. In doing so, we seize the tradition of Recklinghausen’s “alternative city explorations” offered by the local geography and history association and the Volkshochschule. This tradition has already been reflected in the exhibition, publication and city map “Where You Go and Stand...Sites of Persecution and Resistance in Recklinghausen from 1933 to 1945”. The essays published in this memorial book have been topically expanded. The approach is meant to motivate schools, parishes, parties, trade unions, other groups or individuals to organise their own topical “explorations”. Go to Sites of Reign (in German)

3. Memorial Culture in Recklinghausen
Many groups have already practised such or different experiences and approaches to remembrance. This applies in particular to the numerous initiatives of Recklinghausen’s schools. Staffs of teachers, pupils of all age groups and types of schools have made defining contributions to Recklinghausen’s memorial culture within the scope of lesson plans, project weeks or the design of the memorial days of 9 November or 27 January. The third part of this portal provides an insight into this dedication of the young generation. A concise overview of memorial plaques, sites and services in Recklinghausen has also been added. Go to Memorial Culture (in German)

Invitation to collaborate
The memorial book is not completed. Citizens, schools and other institutions and social groups are cordially invited to add to, amend and continue to work on this book. A specialist team has been entrusted with the continuation of the editorial work and the assurance of its accuracy (Jürgen Pohl, Georg Möllers, Dr. Matthias Kordes, effective: July 2017). 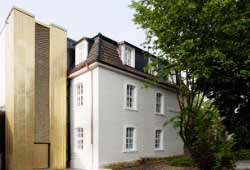